Send us an email

The dental clinic is

I was very happy with the work performed by the Clinic, and yes, I do plan to return to address the gap in my upper teeth.  I too had the pleasure of being Dr. Adam Bodnar’s Client, and he and his Assistant were most helpful.  I think when one travels away from their home Country (and Province), in my case Newfoundland and Alberta, Canada, to have dental work completed, the individual has likely already had intensive work and is drained from the process (and sometime past errors): that was certainly the case for me, at least.  The dental concerns I have, I found were made to seem more complicated in Canada, yet appeared simple to Dr. Bodnar.  Some Clients may require more explanation than I had; but I believe that it is available upon request.  I was anxious before I left Canada, and so had completed my own research on my dental conditions, and had obtained second opinions before leaving.  I find that rather humorous now, as after attending at your Clinic I would prefer to first ask Dr. Bodnar; before other specialists.  He appears ‘down to earth’, and provided straight forward, simple answers to my questions so I could better understand my dental situation; and the work that needed to be done.

Further to the above, Budapest is beautiful – hauntingly so – I still wish to see more of the City and the beautiful country that encompasses it.  If you have an opportunity to see Vienna vs. Budapest, I would suggest you pick Budapest over Vienna.  Lovely as that City may be, perhaps a  result of having a more fortunate history than Hungary in the last century, Budapest has a depth of character that  reaches out to all whom wish to find it.„

The answer of the clinic: Thanks Janet for your review, we are very happy that you shared so much detail including your thoughts and feelings as well in addition to the facts. Janet had some Nobel implants placed in the bottom jaw and our clinic completed it, that is abutments and crowns were fitted. It only took 5 workdays. In the upper region earlier she had sinus lift performed by another clinic that due to some reasons was not successful. She wanted to know if there was any way to insert implants there or just a bridge would be the safe solution.

The clinic in images 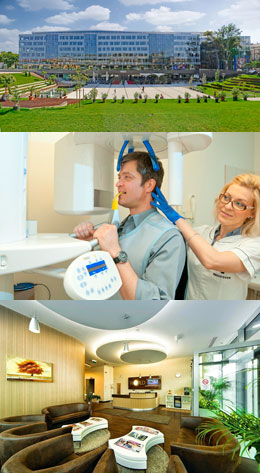